Vegan Pasta Bakes is one of those meals that sounds like a great mid week easy peasy meal…but actually it’s quite time consuming to make. We love it, that’s for sure, but it takes some time.  You can use meat if you wish, but you’ll need to brown it for longer. If you are using Vegan Mince then do be aware that everyone we’ve seen says don’t reheat. So that means no leftovers.  To be honest, my husband has reheated leftovers and doesn’t get what the issue is –  but we’ll go all ‘elf and safety’ and say don’t do it!

One rant…Quorn Mince has egg whites. Why it’s always displayed in the ‘vegan’ section or beside vegan mince is beyond me. Be very careful if you are egg allergic – you need to read the labels carefully for Quorn. There are some Quorn products that are safe, but not the mince.

With Vegan Mince the browning process is different than with meat. First off there’s virtually no fat, so you need to add more oil than you expect. As it’s low fat it also tends to stick rather to the pan. You’ll get use to it – just keep the heat low and don’t leave it alone.  The mince changes colour when it’s cooked. I did find the Naked Moo took quite a while, so do stick with it.

If you’re organised, you can make the sauces earlier in the day and then just do the pasta and mince later in the evening.  I like to keep a portion of tomato sauce in the freezer as it’s great for a quick lunch with pasta and grated vegan cheese.

If you fancy Vegan Mac and Cheese take a look at our recipe Here:

We love this dish - it's a wonderful mix of tangy tomato sauce and wonderful vegan cheese sauce. It's not quick to cook, but it's delicious.
By: allergymums

Step 1
Preheat your oven to 180°C 350°C
Step 2
To make the Tomato Sauce
Step 3
Start by frying the onion in a little oil until it just begins to colour
Step 4
Add the garlic and cook for a minute or two to ensure it’s not ‘raw’ and bitter
Step 5
Add in the Pasanda, sugar, red wine, worchester sauce, Paprika and Vegan Stock. Stir and allow to simmer away for a good 30-40 minutes. Check it occasionally and adjusts seasoning
Step 6
Make the Cheese Sauce:
Step 7
Melt the margarine in a heavy based saucepan and sauté the onion until soft and slightly coloured. Add in the yeast, grated cheese, cornflour, mustard and lemon juice and stir
Step 8
Grab a whisk and slowly add in the milk whisking while you go. Whisk the sauce while it heats up…you’re not looking to get it boiling, but rather hot enough to have the cheese melt and make a lovely thick sauce.Heat it to the point that its bubbling a bit at the edges
Step 9
Once done, and cooling, you can cover with cling film so a skin doesn’t form
Step 10
Cook the Pasta according to the instructions and keep to one side ready to stuff! I love the massive shells.
Step 11
Add some oil to a large, heavy based frying pan and add your Vegan Mince. Fry until it’s cooked (it will change colour quite a bit). You may need to add some more oil to ensure it doesn’t stick too much. This process can take a good 10 minutes so be patient
Step 12
Once cooked add in half of the Tomato Sauce and stir to combine – you can add a bit more if you like but make sure you leave enough sauce to cover the base of the baking dish you plan to use (or start by covering the base, and then mix in the rest of the sauce with the cooked vegan mince). Covering the base with sauce ensures the pasta doesn’t stick
Step 13
Cover the base of your pan with the leftover Tomato Sauce. Grab a teaspoon and stuff each pasta shell with the tomato mince mixture. Place each shell in the dish as you go.
Step 14
Once they are all stuffed pour over the cheese sauce and bake for 25-30 minutes in a hot oven
Step 15
Serve with warm bread and a side salad. 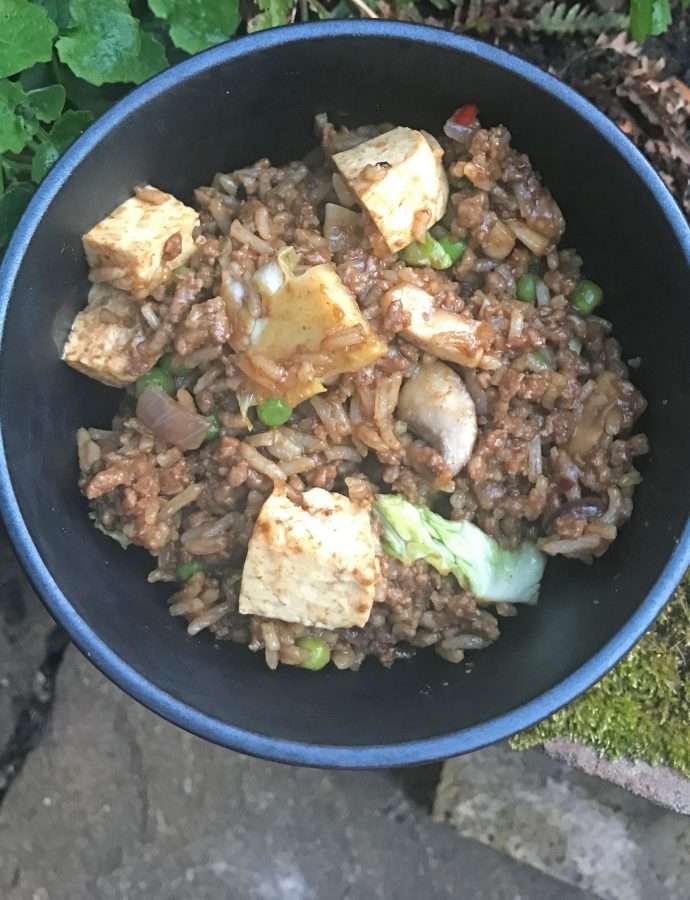