Vegan Jam Donuts are a joy to eat. My advice is to stick to one type of vegan donut to begin with – so if you like chocolate glaze, then do that. We love jam so that’s why we started with Vegan Jam Donuts.  Lemon curd is also nice in the middle.

We inject the jam or lemon curd into the centre for that traditional donut look – however, Molly has been known to slice a donut in two and spread jam on each side to make a ‘donut sandwich’ when she’s in a bit of a rush!

You can either dust them with icing sugar, or roll them in cinnamon sugar. But do be warned – the icing sugar goes claggy if the donuts are left overnight so put the icing sugar on as you eat them! Which brings us to our next note – donuts don’t last.  Yes, you can eat them the next day but they do go stale quickly. We pop them in the microwave for 10 seconds to warm the up the next day. 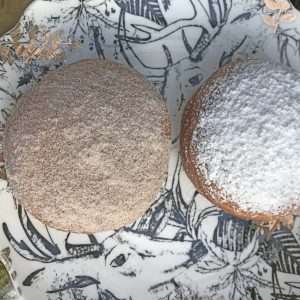 Here is our Vegan Lemon Curd recipe if that’s what you want to do, otherwise just grab a pot of jam and go!

A couple of things will make this easier. Firstly keep everyone else out of the kitchen. Hot oil is dangerous and you don’t need the distraction or the risk of being bumped.

Next don’t lean over hot oil – it can splatter. Only put in two donuts at a time. A crowded pan will cause the temperature to drop. Time your donuts – 2 minutes a side. Don’t go by the colour (when I do that I end up with soggy middles).

Finally don’t increase the heat quickly, do it slowly and keep track of the heat. If your oil gets hot enough to smoke, then its way too hot and will start to taste bitter. I’d chuck it out and start again.

Donuts are my favourite thing. I really love them. Stuffed with jam or lemon curd they are a joy to eat.
By: allergymums

Step 1
Warm the milk – but only until it’s tepid, not hot, not properly warm either. So in a pot on a low temp, or 10 seconds in the microwave
Step 2
Add in the Aquafaba, 1 tsp of sugar and the yeast and set to one side for 5-10 minutes to froth up. Then add in the Flax Seed
Step 3
Beat the dairy free butter, sugar, salt, and vanilla extract together
Step 4
Add in the milky mixture and beat. It won’t really come together fully but don’t worry
Step 5
Add in the flour one cup at a time. Beat to combine after each cup. You’ll end up with a nice dough that is a bit sticky
Step 6
Knead on a floured surface for 5 minutes and then pop into a lightly greased bowl, cover with greased clingfilm and a tea towel and leave somewhere warm for an hour
Step 7
The dough will have doubled in size after an hour
Step 8
Roll it out to about half an inch thick and cut out with circular cookie cutters about 3 inches in diameter. You can rerolls the left over bits. Place on a baking sheet, cover with greased cling film and a tea towel and allow to rise for another 45 minutes
Step 9
While they are rising for the second time either mix 1 cup of caster sugar with the cinnamon, or sift your icing sugar.
Step 10
Now for the frying – I use a deep casserole dish (caste iron). Add in a full litre of oil and heat to 375°F 190°C – use a thermometer to check. Balancing the oil temperature is key here so keep checking and adjust a little at a time
Step 11
Put two donuts into the oil and set a timer for 2 minutes. After the donut has cooked for two minutes turn over for another 2 minutes
Step 12
Drain the cooked donuts on paper towel and then roll in the sugar coating of your choice. I put the donuts on the icing sugar and then sift more on top. For the caster sugar and cinnamon combination I just roll the donuts in it
Step 13
Allow them to cool on a separate plate, and then inject with the jam of your choice. If you don’t have an injector you can use a piping bag with a thin nozzle. However I always need to make the initial hole with a skewer and go from there. 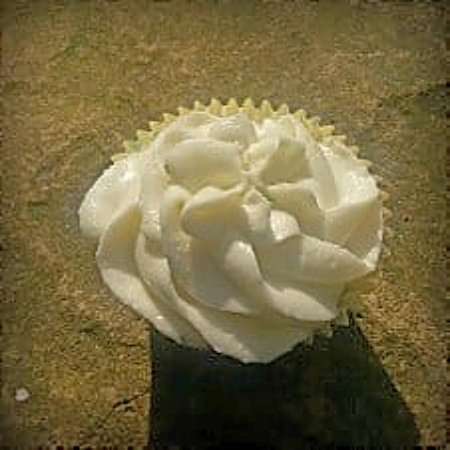