Vegan Churros are fabulous – sort of a mini donut covered in cinnamon sugar.  Due to their long shape they are easier to cook, and as they don’t have yeast, faster to make. It’s closer to a profiterole dough than a yeasty bread dough. The main issue is the cooking of the Churros. They are deep fried which is always tricky. 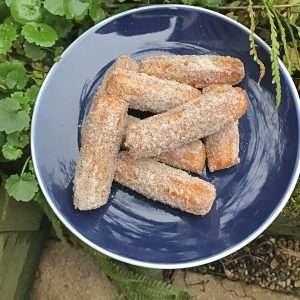 Bar all people and pets from the kitchen. Hot oil is dangerous. The phrase ‘GET OUT’ tends to ring out when I’ve deep frying!

Place the pan on the back burner so you can’t knock it easily to the floor, and make sure the handle isn’t in your way.

Don’t peer over boiling oil! Wear oven gloves to protect your hands and long sleeves as well as an apron.

Have everything you need ready to go, you aren’t taking your eyes off the oil so you can’t dash to the other side of the kitchen to get a slotted spoon.

Plate lined with paper towel to drain the Vegan Churros on

Plate with Cinnamon Sugar on it – lots!

Oil temperature is key to getting Churros that are cooked through properly.  I don’t like it too crazy hot – 350°F, 176°C is about right.  You need to keep checking your oil temperature. I find it can cool down fast when you add the Vegan Churros, but then it heats up fast too. Sometimes I gently move the pan onto another burner to let it cool a bit. Use your thermometer to check the temp while you’re frying your  Vegan Churros and remember adjust the temperature slowly – don’t whack it up or down. 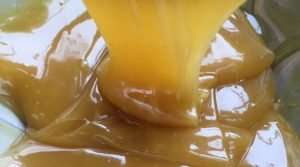 Wonderfully crisp on the outside and soft on the inside. Rolled in Cinnamon Sugar these are a real treat.
By: allergymums

Step 1
Put paper towel on a plate and have it beside your stove, mix the cinnamon and sugar together and have ready on another plate. Have another plate ready to move the Churros out of the sugar mixture. Have a slotted spoon, your thermometer and oven gloves ready
Step 2
In a large pan mix the water, 1/3 cup sugar, vanilla, salt and oil. Bring to the boil and then move off the heat
Step 3
With a wooden spoon stir in the flour to make a thick dough. This requires a good bit of stirring, keep going to make sure you don’t have lumps of flour left. Leave to cool for about 10 minutes
Step 4
Move your dough into a large piping bag fitted with a star nozzle
Step 5
Grab a large pan – I use a high sided frying pan – and heat the oil to 350°F 176°C. Do this gently. Don’t put it on a high heat as you’ll end up with too hot oil and smoke. Take your time and get the temperature stable before you start. Its doesn’t matter if it bounces around a bit, but you want to keep it within 5 degrees or so.
Step 6
Pipe the Churros into the oil (I go for about 3 inches) and cut the strip of dough with a pair of scissors
Step 7
Cook until golden brown – a good 5 minutes. Transfer with a slotted spoon to the plate with paper towel to drain, and then using tongs pop onto the plate with the sugar cinnamon mixture. Roll around to cover completely and move to a plate. Ta Daa! 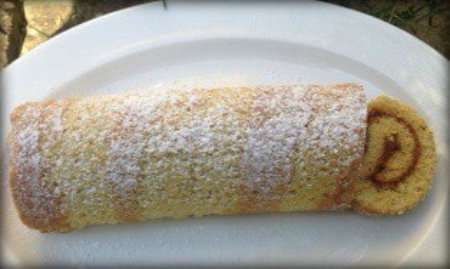 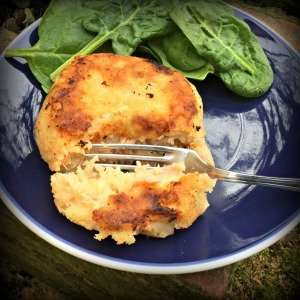 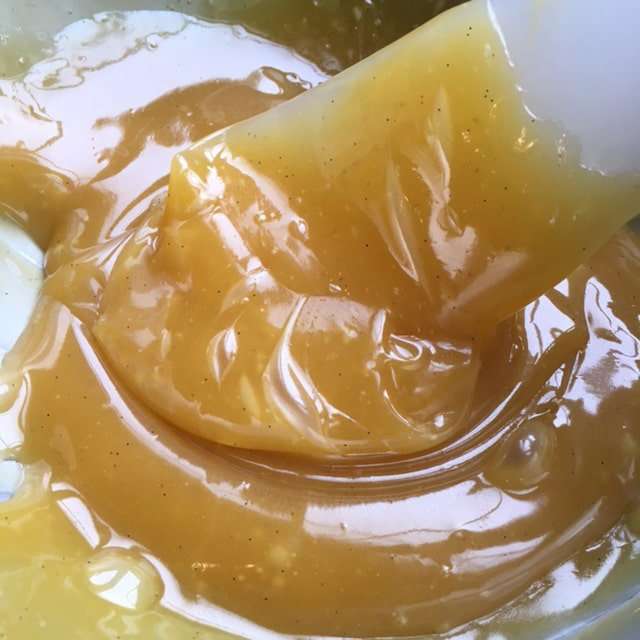