To a great extent the vaccine rollout has been an astonishing success (even with the recent delays).  There has been a lot to complain about with government’s handling of Covid – the wasted money on Serco Test & Trace,  PPE contracts and Nightingale hospitals closing down having treated no, or few patients, but the NHS rollout of the vaccine has been amazing.

So, what’s all the fuss about with asthmatics then?

In March of last year we were all told we were at moderate risk from Covid and should take extra precautions.  This wasn’t an order for all asthmatics to shield. Only those with the most severe form of Asthma were told to do that. But we were told to take extra care, so many of us did. We didn’t rush out to eat out, we stayed at home and made sensible decisions. It was only common sense – we take steroids to breathe every day, so Covid would obviously hit us harder. Many of us get chest infections following catching the common cold, I have antibiotics and prednisone (steroid tablets) in my bedside table in case I go downhill rapidly over a weekend. We take Ventolin with us when we leave the house. It’s hard always worrying about being able to breathe.

Once the vaccine rollout began, we were told that moderate risk people would be Group 6. Severe Asthma sufferers would be Group 4. Not a problem, all fine and dandy.  And then it all changed – the guidance suddenly referred to asthmatics having had 3 doses of steroid tablets over three months, or having had a hospital admission for Asthma.

We’ve been told all our lives how dangerous asthma is, and that it’s unpredictable. Everything from air pollution to hay fever or a cold can be a trigger. Asthma isn’t a disease that travels a clear road, but rather it flares suddenly and can be deadly. That’s why we take our meds so carefully, have Asthma reviews, have emergency plans and never leave the house without Ventolin (the emergency reliever).

Suddenly we’re being asked to believe that a disease that attacks the lungs isn’t more of a danger to us than it is to people with healthy lungs. It doesn’t track. Then the Lancet published a study saying that Asthmatics were at greater risk of long Covid and hospitalisation – confirming our fears – Covid is a greater risk for us.

It’s a very stressful time for teenage asthmatics as well. They are back at school, unprotected and the disruption that hospitalisation or long Covid would cause to their lives is an awful risk. This info graph circulated on Twitter and Facebook showing the changes. 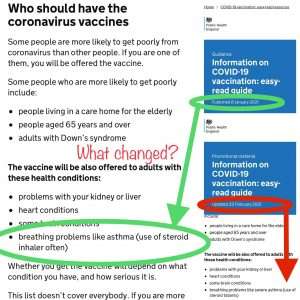 Now GPs had to trawl through their records looking for hospital admissions to see if their asthmatic patients qualified. Many didn’t have complete records so lots of asthmatics found themselves at loggerheads with their GPs, having to dig through files, call hospitals, all trying to get proof as hospital admissions.

We had an issue as well, luckily, we have copies of Molly’s discharge papers from her hospital admission.  At first the GP refused our request for Group 6. We were told she didn’t qualify because she hadn’t been admitted to ICU (not a requirement). Later, they relented after we pushed back. However, Molly still hasn’t had the vaccine as she must have Pfizer and they don’t know when deliveries will arrive. So, more stress as we wait for a last-minute phone call.

It all seems to make no sense, JCVI has said its sticking to age category for ease and speed. Yet the JCVI added in an extra criterion for asthmatics resulting in huge amounts of GP time being spent hunting records. So, on the one hand they want simple, then on the other they add in layers.

Groups started springing up on Facebook and Twitter agitating for a change in policy. Asthma UK chose not to fight for a return to Group 6, something that has caused a great deal of upset and anger. Instead, they followed a policy of asking for a new classification for Asthmatics outside of the age categories. That request was rejected. The Asthma and Allergy Foundation came out in favour of Group 6, gaining a great deal of support from upset Asthmatics.

Hospitalisation and long Covid are devastating, and hugely costly. It is simply much cheaper to vaccinate the vulnerable. There was a sense of disbelief within the Asthma community that this was happening. Many GPs expressed sympathy but their hands were tied.

The suspicion, amongst many was that it was a numbers game. The government had an ‘all vulnerable people are vaccinated by’ date and the JVCI made the guidelines to fit the target.  On social media we were called lazy, people making a fuss, asthma’s not that bad, get in line, stop making stuff up. Its been a brutal time.

If you feel Asthmatics who are at risk of hospitalisation and long Covid should regain priority, please join us on Twitter with the #FluJabEqualsCovidJab or #asthmaticsatrisk.

There is also a petition here.

Let’s follow the science and vaccinate the vulnerable, not play with people’s health to hit a target.

This is a short one – there is a team at Southampton University that needs patients with sever Asthma to help with a survey – it’s only a few minutes and will help them look at ‘patient centred defined response to biological treatments…. In short

An important step for the allergy community has been taken with the introduction of Natasha’s Law. Born of the tragedy of Natasha Ednan-Laparouse’s death after eating a Pret sandwich with sesame baked into the bread. Natasha had suffered from anaphylaxis and asthma all of her

Asthma, The JCVI and why #asthmaticsatrisk are still scared

Recently, my Twitter feed was a bit angrier than normal. Frankly most of the time I’m tweeting baking recipes and highlighting advancements in allergy treatment. That’s really been my focus – providing recipes and advice for parents of allergic kids. But recently, as an asthmatic,